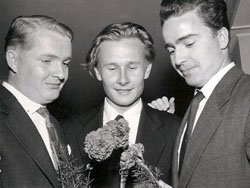 Veijo Varpio, tenor, was born in Kotka/Finland in 1928. After his graduation from Lyceum he studied law in the University of Helsinki.
Veijo Varpio studied singing with Arvo Vainio, Poul Hansen, Ettore Campogalliani and Francesco Carino. He sang in the choir of the opera in Helsinki 1949-52 and was a soloist at Finnish National Opera Helsinki 1956-59. In the same year he got a contract to the opera of Lübeck/Germany. From there he changed to Opera Wuppertal in 1960 and to Deutsche Oper am Rhein Düsseldorf until 1969. Then he worked as a free lancer with short and long term contracts in Germany and Europe.

At Savonlinna Opera Festival Veijo Varpio worked 1969-70, 1974-75 and 1995-96. After singing in about 60 different opera theaters for 19 years he returned to Finland in 1978 and became director of Savonlinna Opera festival until 1980 and then Director of Helsinki Festival 1980-94.
Veijo Varpio worked as the director of Helsinki Festival for 14 years. In this time the festival became one of the most interesting events for high culture. 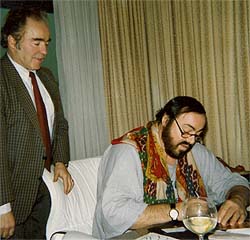 When Varpio is asked about his greatest achievements, he mentions the exhibition of Ars Vaticana in 1982, the performance of Matthäus Passion with Staatsoper Hamburg in 1985, the Bartok Marathon 1981, the Night of the Arts, which was established during his time in addition to all the concerts with different star soloists.

After Helsinki Festival he created his own company, that brought finnish musicians to the concert halls of middle Europe and at the same time star soloists to Finland. In this new work his studies of law and good contacts from his time as an opera singer helped.
Concerts with his own company: Three Finnish Basses, Kathleen Battle, Luciano Pavarotti, Placido Domingo, The 3 Sopranos. 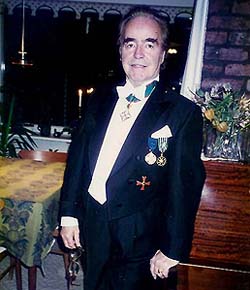 Veijo Varpio died in october 7th 2015 in Helsinki at the age of 87 years after a fulfilled and active life. The musical heritage of the family will be carried on from his children Marja-Leena Varpio (soprano and music teacher), Juha Varpio (pianist, composer, arranger of popular music), Kari Varpio (economist) has been concert producer and is now working in publishing business.

Varpio achieved for his work as an artist and manager for the arts honours:

Student of the Year 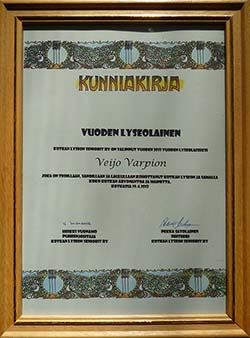 The Seniors of Kotka Lyseo School have elected as Student of the Year 2013:

who has approved with his deeds, his words and his singing the reputation and recognition of Kotka Lyseo and the city of Kotka.
Heikki Vuonamo, Head of  Kotkan Lyseon Seniorit RY
Pekka Savolainen, secretary

In his biography book Veijo Varpio tells in a funny way about his childhood in his birthtown Kotka and his studies in Helsinki. After winning a tenor competition Veijo Varpio had a contract as tenor soloist at Finnish National Opera Helsinki. Then he worked as an operasinger in Germany for 19 years and sang in more than 60 theaters. After coming back to Finland he worked as director of Savonlinna Festival. Then he was nominated director of Helsinki festival and retired in 1994.
The readers become aware of the many problems and surprises that show the development of a choirboy from Kotka and student of law to an international opera singer and festival director.

Theatres where Veijo Varpio was engaged